The conceptual plan approved by Matthews commissioners includes reconfigured monuments. “There was a feeling that right now with the monuments in a straight linear line, it really is much too reminiscent of a cemetery,” said Howie Labiner of the Matthews Parks & Recreation Advisory Board. Photo courtesy of Town of Matthews 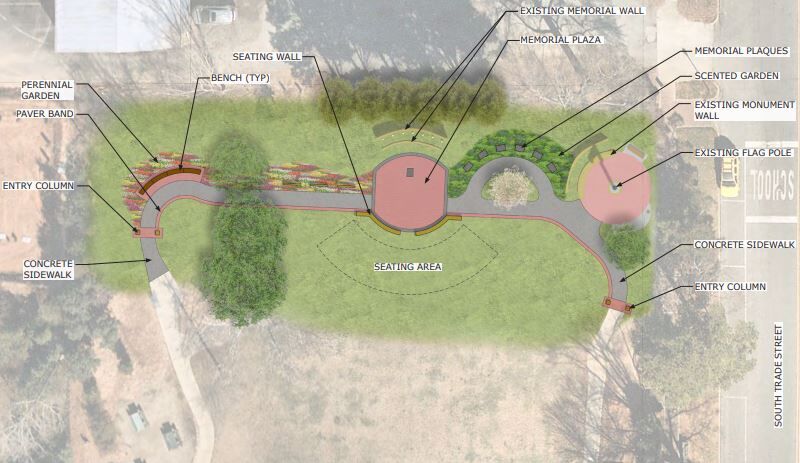 This map shows how the park could look. Photo courtesy of Town of Matthews

Commissioners created the park earlier this year from a slither of Stumptown Park. The engineering firm has been working with town staff and members of parks and veterans advisory boards on what the new park will look like.

The challenge is making the park its own without detracting from Stumptown Park.

“Stumptown Park, unfortunately, is a very tight, very limited space,” said Howie Labiner, chairman of the parks and recreation advisory board. “What we tried to do with come up with a design that would meet the needs of the veterans as well as the needs of the town because certain events such as Matthews Alive, BeachFest, the symphony and others require usage of pretty much every square inch of the existing park.”

Commissioners decided to move forward with the plan with the exception of the seating wall.

Commissioner John Urban, an architect by trade, suggested more be done around the northern edge of the site in the event the adjacent property gets redeveloped. This would prevent cars and the dumpster pad from being visible from the park.

Mayor Pro Tem Renee Garner wanted to see a larger sidewalk to accommodate wheelchairs and a few more benches around the perimeter. She liked the idea of the educational storyboards.

“I think all of you have done an excellent job with a ton of input and really coming up with the solution that fits the desires of a whole lot of different viewpoints,” Garner told Stewart Engineering.

The firm estimates the plan will cost $190,207, which doesn't include design and engineering costs or design fees.

Corey King, who serves as parks and recreation director, said a complete project would be brought to the board to determine a budget, in which they would address sidewalks and any other concerns.

Mark Tofano, commander of the Hooks-Orr American Legion Post 235, offered a plan on behalf of his organization that would make the veterans park look more distinct. His plan would come at no cost to the town and be paid through donations.

“The idea of a private group funding improvements in a public park sounds great, but you create issues of perceived ownership and control that may prove problematic down the road,” Labiner told commissioners.