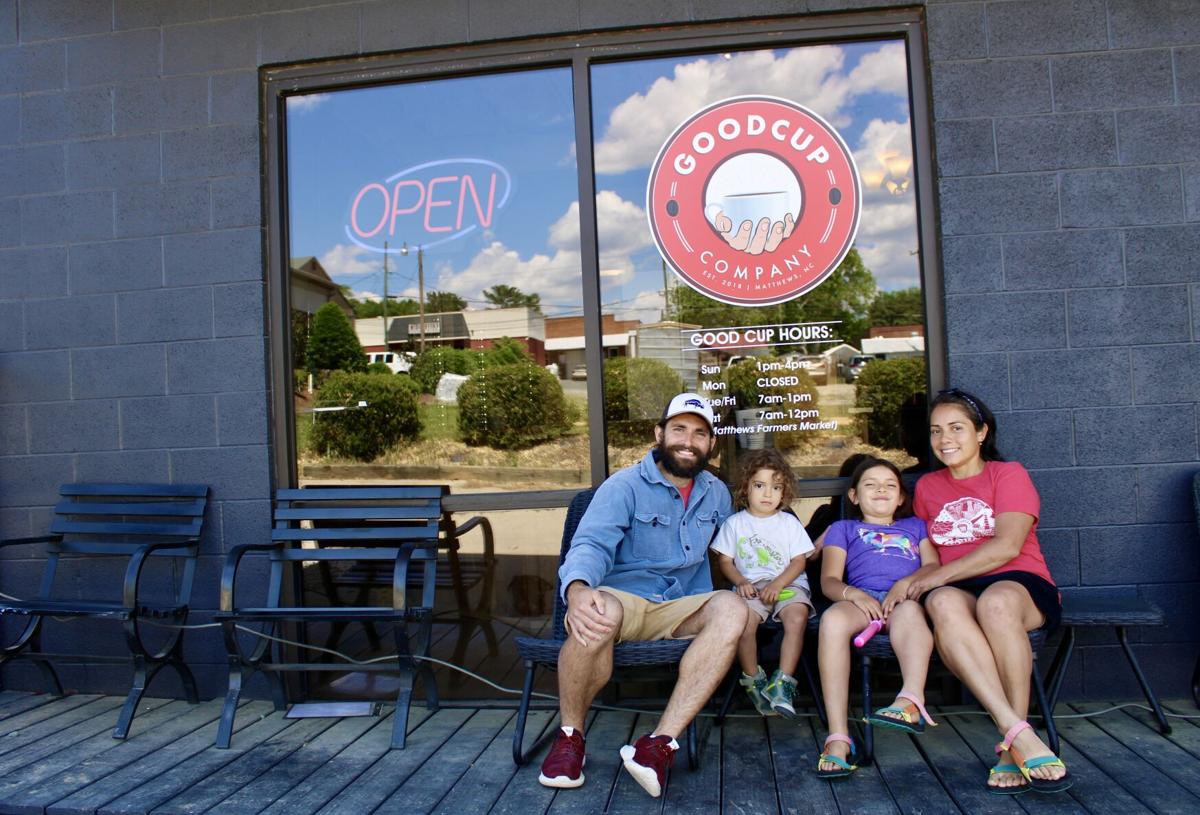 Debbie and Joshua Chopas with their children Titus, 3, and Lulu, 8, on the front porch of Good Cup Coffee’s new location inside Fullwood Market. Karie Simmons/CMG photo 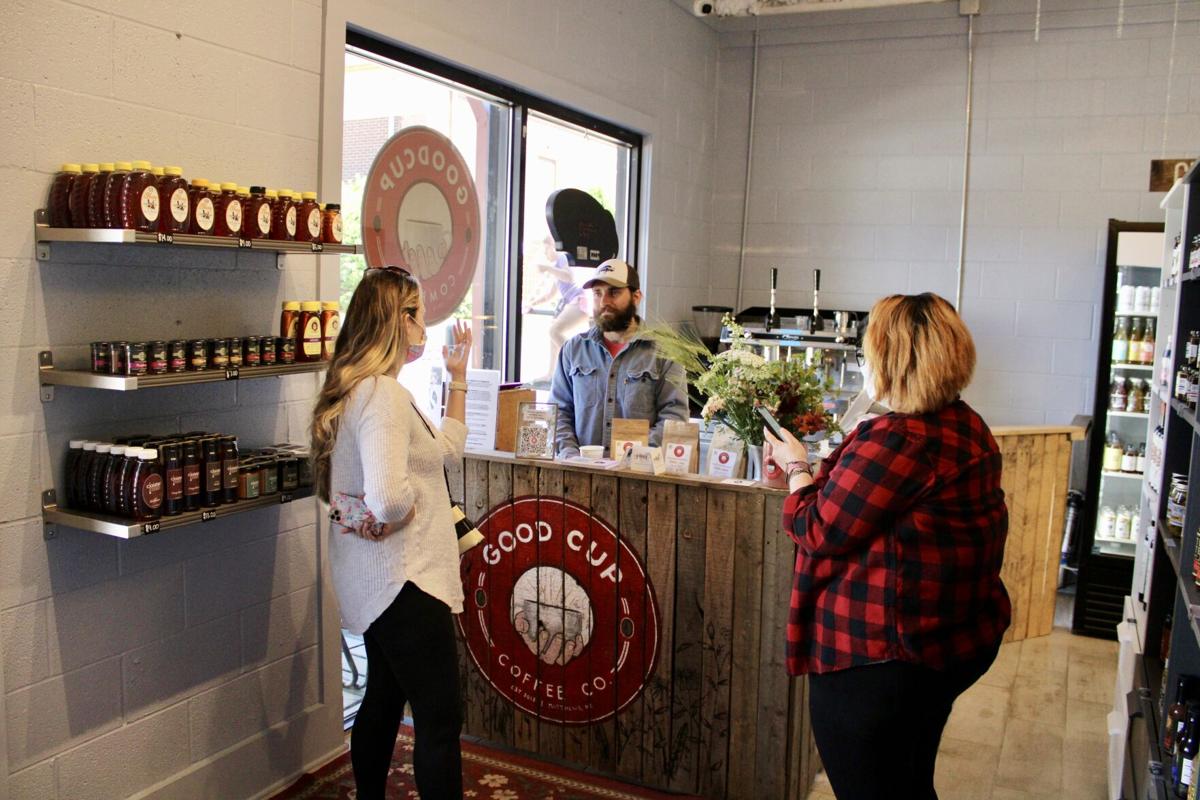 Good Cup Coffee is to the left when you walk inside Fullwood Market, 131 E. John St., Matthews. Karie Simmons/CMG photo 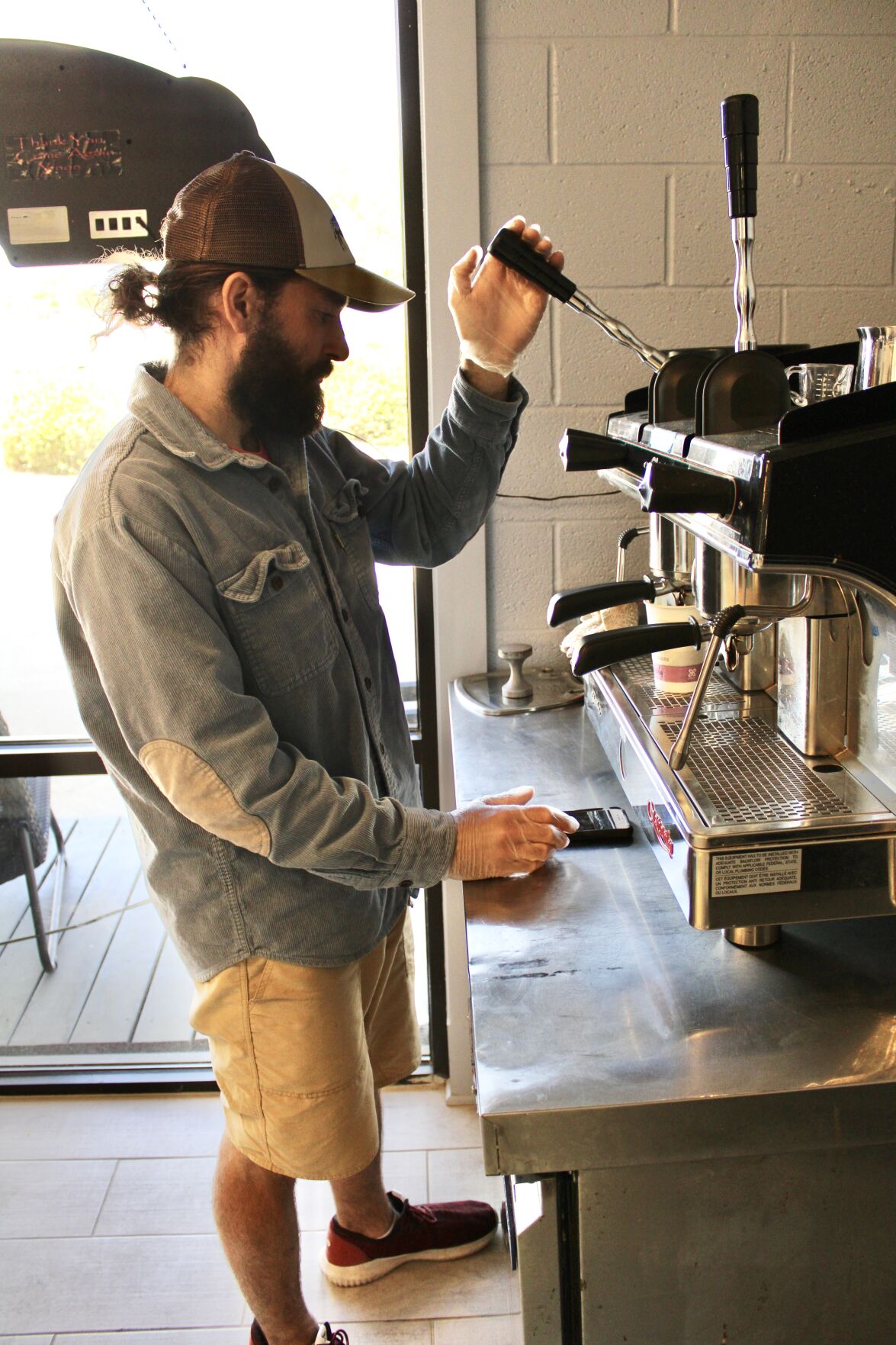 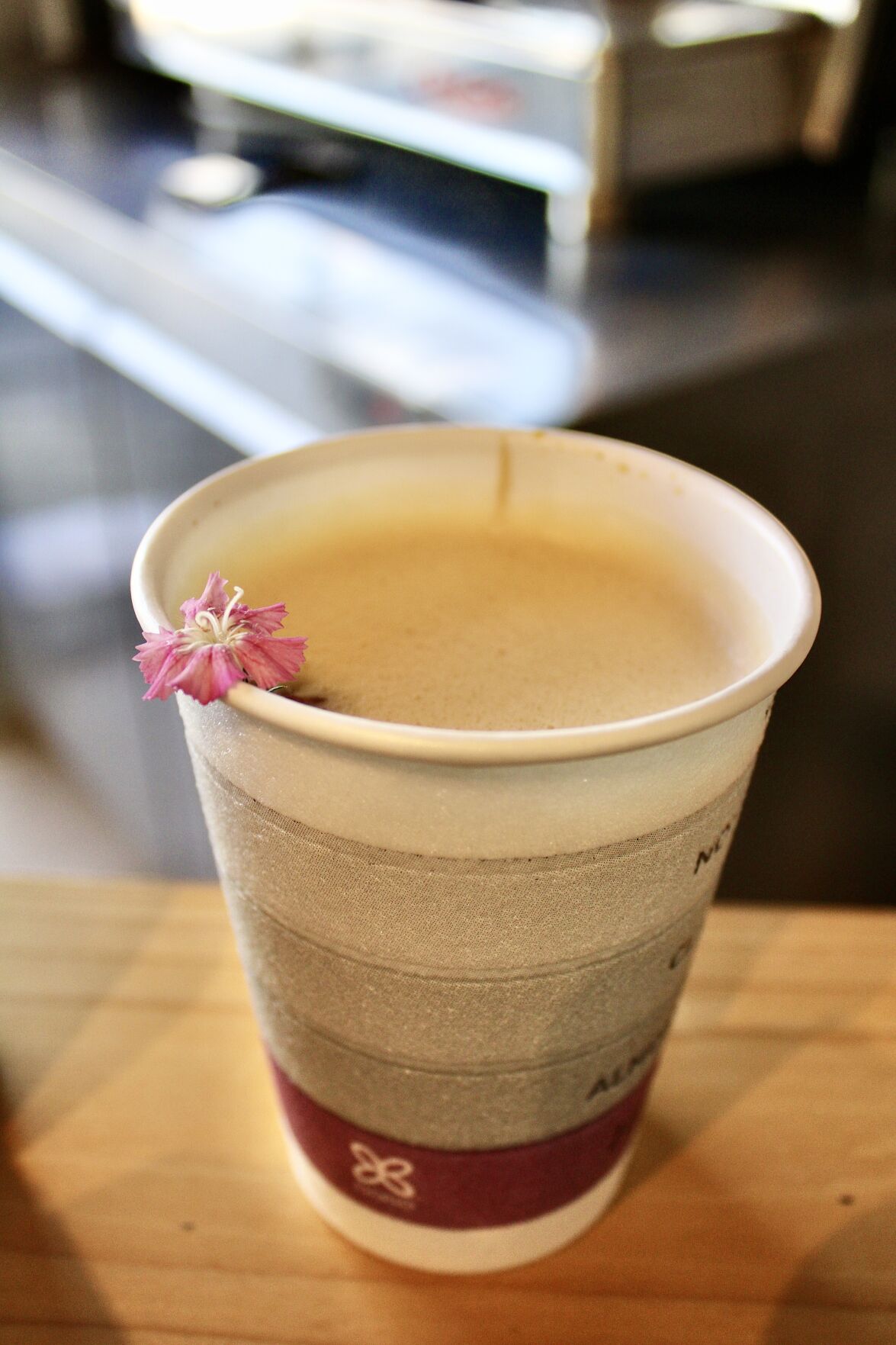 The Wildflower Latte is infused with milk and honey from Dancing Bees Farm in Monroe and edible flowers grown by Tega Hills Farm in Fort Mill. Karie Simmons/CMG photo 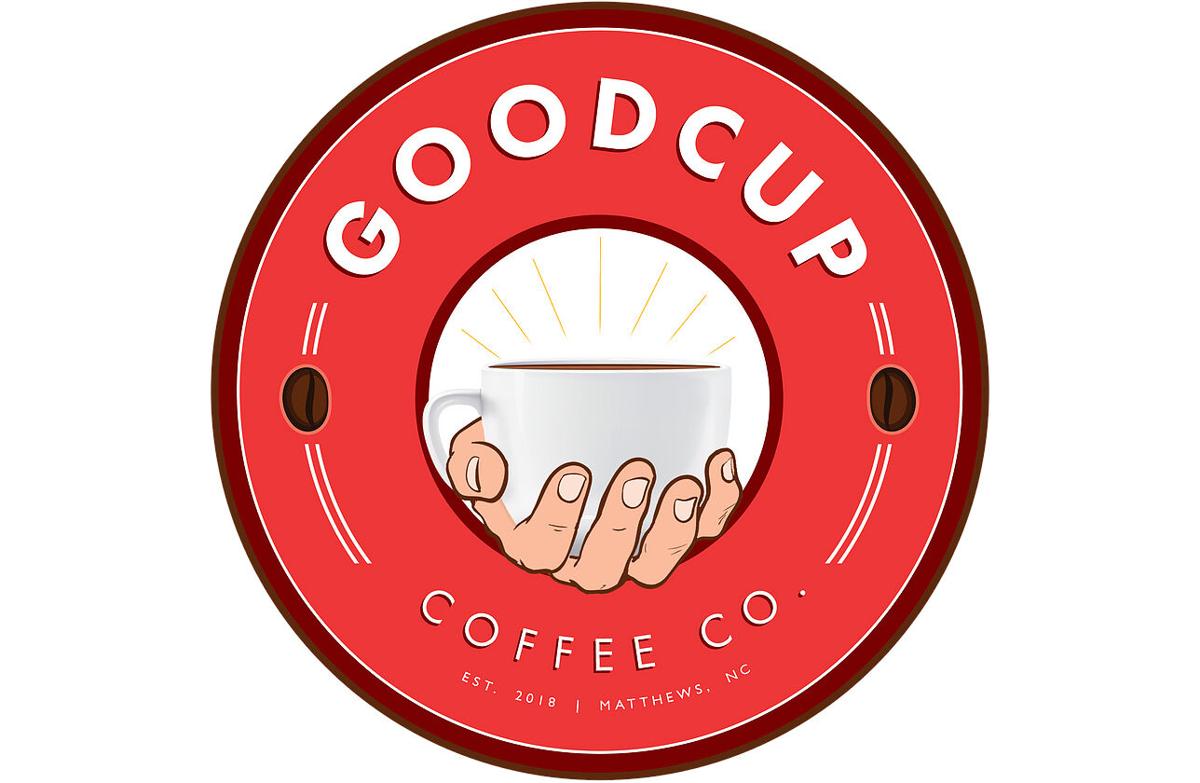 Debbie and Joshua Chopas with their children Titus, 3, and Lulu, 8, on the front porch of Good Cup Coffee’s new location inside Fullwood Market. Karie Simmons/CMG photo

Good Cup Coffee is to the left when you walk inside Fullwood Market, 131 E. John St., Matthews. Karie Simmons/CMG photo

The Wildflower Latte is infused with milk and honey from Dancing Bees Farm in Monroe and edible flowers grown by Tega Hills Farm in Fort Mill. Karie Simmons/CMG photo

MATTHEWS — Next time you step inside Fullwood Market on East John Street, look to your left and you’ll see a familiar red, circular symbol. In its center, there’s a hand holding out a cup of hot coffee, as if offering it to you like a friendly neighbor.

For regulars at the Matthews Community Farmers’ Market, the Good Cup Coffee logo is like a beacon they can spot a mile away. They’re used to seeing owners Debbie and Joshua Chopas and their children Titus, 3, and Lulu, 8, serving artisan drinks at the market every Saturday morning.

But there’s another place to catch Good Cup for those who can’t wait or won’t make it to the farmers’ market. Thanks to a new partnership, the mobile coffee shop is now inside Fullwood Market every Tuesday through Sunday.

“We want to give our Good family stability,” Debbie said, referring to their customers. “They know we’re going to be here.”

The Chopases purchased Good Cup a few years ago from Benjamin Koenigsberg, the son of New Town Farms owners Melinda and Sammy Koenigsberg, after seeing his coffee booth at the Matthews Community Farmers’ Market. They continued his legacy of being a vendor there, while also expanding to pop-ups, catered parties and community events in a 1971 Volkswagen Westfalia, which they outfitted with an espresso machine and portable water station.

“We named her Cami for chamomile because she’s a wildflower,” Debbie said of the vintage bus. “We found her on the side of the road.”

In September 2019, the couple moved Good Cup into The Loyalist Market in downtown Matthews. Debbie said they were inspired to find a more permanent space after customers kept asking if they had a brick and mortar location. It would only be a few months before the shutdown caused by the COVID-19 pandemic prompted them to leave The Loyalist Market and transition Good Cup back to mobile.

It was during that interim period — when the Chopases were navigating the pandemic like other small business owners— that they met Fullwood Market’s Jason Haas. He tried one of the drinks they were serving at a Charlotte Eagles game and suggested they join forces.

Debbie said it was a natural partnership.

“His heart is to serve local food to local people,” she said. “We like to partner with like-mindedness.”

The Chopases are big on buying local and supporting small business — most of Good Cup’s drinks are made with ingredients from Matthews Community Farmers’ Market vendors — which is why Fullwood Market was such a natural fit. They like to partner with artists, farmers, botanists and creators to infuse a unique cup of coffee, chai, tea or tonic and create what they call “an edible experience.”

Joshua said they want to create a platform for other small businesses and believe in collaboration over competition.

“Because we all offer something unique,” he said. “We can play off each other and help each other both grow.”

The menu at Good Cup changes with the season and inspiration, as many of the drinks are named after characters in whatever books the Chopases are currently reading.

The Wildflower Latte, Good Cup’s most popular drink, is infused with milk and honey from Dancing Bees Farm in Monroe and edible flowers grown by Tega Hills Farm in Fort Mill, S.C.

Debbie and Joshua said they’re happy with Good Cup’s new home in Fullwood Market, but told customers used to seeing them at the farmers’ market not to worry. They will still be there every Saturday to make their favorite coffee, and they’ll be driving “Cami” to neighborhood pop-up events during the week.

“Our heart is to serve and nourish the community one good cup of coffee at a time,” Debbie said.

Good Cup is open inside Fullwood Market (131 E. John St., Matthews) from 7 a.m. to 1 p.m. Tuesday through Friday, until noon on Saturday and from 1 to 4 p.m. Sunday. Good Cup will still have a booth at the Matthews Community Farmers’ Market on Saturday mornings. Visit https://www.thegoodcup.rocks to learn more and follow @goodcup on Instagram to stay connected.